There are pirate sites out there with my books on them. That's part of the reality of the internet. But please, don't support the pirate sites. At best, you're taking money away from the artist who's probably not even breaking even to begin with. At worst, you're actually making money for the pirate site. So here's the thing:

If you love my books but for whatever reason really can't afford them, email me and I'll send you an electronic copy. All I ask is that you review them, and tell others about them. Hopefully some of those people will be able to afford them. :)

And remember, I donate 10% of the money I make from my writing to the Barrie Women and Children's Shelter.

Why is the secret to eternal life always in the "Lost City" of whatever? You'd think something that important, people would keep track of that shit. Most of these cities are "lost" because they were abandoded, but I don't care how much of a hurry I was in, I'd be sure to take the secret to immortallity with me when I left.

High Priest: "The Island is sinking! Flee for your lives."

Me: "Sure, be right with you as soon as I grab this photo of my dog, this cool watch my dad left me, and...oh, right...the secret to eternal life."

As part of my job, I'm developing lesson plans for the Engine Fire and Overheat System. (Yes, I'm thrilled to be part of this dynamic team!) I think the part I hate most is trying to think up the "developmental" questions. They remind me of those dumb questions they used to ask on those cheesy game shows:

Host: If you were a coffee maker, what kind of coffee maker would you be, and why? Let's see what you're wife has to say.

Wife: Hmm…Let's see. Well, it wouldn't be no drip. Maybe….instant?

THE MOONLIGHT WAR launches today, available in paperback and/or eBook format at most online retailers.
Amazon
Barnes & Noble
Smashwords
iTunes
Three caravans have vanished traversing the Cowcheanne Way and are never heard from again. Despite rumours of native uprisings, bandit armies, and worse, a new caravan is outfitted to travel the Way. As an ancient evil is unleashed upon them, can a group of heroes band together for survival, or are they doomed to join the ranks of lost souls claimed by the cursed Cowcheanne Way? 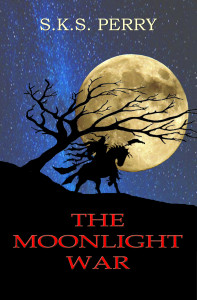 I'm constantly asked (mostly by my therapist) where I come up with the names and characters in my books, so here's a rundown:

James Decker – he's mostly me, with a little of my son thrown in (because we're so much alike). But he's named after my brother.

Bear – my dog growing up. It's a pretty accurate description of him, too, except for the ghosty parts.

Josh – the character is based on my brother, the description was pretty much made up.

Sabrina –the character is mostly my wife, the description is just an older Alex.

Leanne – probably an amalgam of the best parts of every woman I ever dated. Hey, this is fantasy, right?

Charlie – Charles Coleman Finlay – one of the smartest, nicest people I know.

Greg – a friend since childhood.

Dr Jodie Snowden – someone I met on Second Life, she used to DJ at a dance club there.

Olie – a military co-worker from my early days.
Julie – a witch (Wiccan?) I used to know.
Michelle – my first real girlfriend.

Daylight – my most awesome friend and fan,

Various names you might see throughout my work, (or probably will, eventually) such as Gibson, Snider, Boyle, Dominey, Taylor, Grant, Turner, Kent, Ennis, Bryant, and Goldberg are all childhood friends.

Names to be added to the list: Morisseau, Gaynor, Glover, Hoak, Flatness, Cox, Singh, Street, Szego, Jemin, Cooke, and Hall, to name a few. Don't worry, I'll get around to you. 

Anyone nasty I totally made up.

I occasionally get questions and fan mail about my work, and to the best of my ability I try to respond personally to each and every one. Here are some of the answers I've given to various questions in the past month or so:

No, Drat is not based on a real person.
Yes, Detective Greg McMillan is.
No, I don't know where you left your car keys. (Did you check under the cushions of your sofa?)
No, I have never met a vampire in real life. (That I know of.)
No, I don't know why your Kindle won't connect to Amazon. Have you tried turning it off, and then on again?

What are the criteria for calling yourself an author?

Some people say that to be called a legitimate author you should be vetted through a traditional publisher. After all, anyone can just press “upload” nowadays and find themselves published on Amazon or Smashwords.

So, fair enough. Just exactly how big does this publisher have to be? How big of a print run? If you’re published by a small press with a print run of a few hundred, does it still count? Does it count more than the person who self-published at Amazon and sold 3000 copies?

What if you’re published by one of the big publishing houses, but no one buys your book. It’s a dismal flop. Does that still count?

What if you’re book is pirated, and everyone reads it but no one pays for it?

What if a publisher buys your book, but goes under before they get the chance to publish it? Or is being a publisher kind of like being the Pope, and as long as they bless you with the publisher holy water you’re good?

Does it count if other people call you an author, and not just your mom and your friends, but…say…fans? People you’ve never met, who might live on the other side of the world, and who write to tell you how much they loved your work?

I’m guessing it all depends on who you ask, but in my experience as a self-published author, don’t expect most of the traditionally published authors to think of you as one of them. You may be an author, but you’re not an AUTHOR. And if that hurts your feelings, well, get used to it.

According to Amazon.ca, the paperback version of DARKSIDE: DAMNED IF YOU DO is "Out of stock." No kidding. It's print on demand through Createspace (which is owned by Amazon).

Amazon.com knows better, and lists it as in stock.

So don't fall for their lies. Just order it. I promise you, they'll print one special just for you. :)

Um...so apparently THE MOONLIGHT WAR is available on pre-order as a Kindle eBook, for those of you who just have to have it before you can have it?

Yeah, I don't get it either.

In keeping with my practice of doing absolutely everything myself on my self-published novels, here is the new cover art for THE MOONLIGHT WAR, coming July 31, 2015. 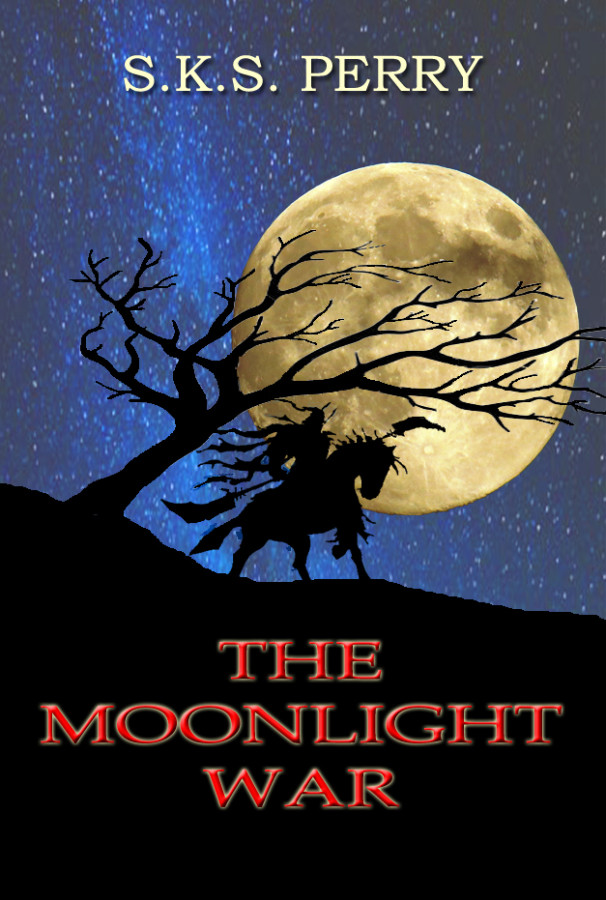